I have spent the past month playing with the first pellet grill from Oklahoma Joes, the Rider DLX., and I think it is great! The Rider DLX has the classic Oklahoma Joes styling, massive capacity and, most impressively, functions as a smoker and a grill. The ability to obtain the high heat needed for serious grilling has traditionally been a weakness of many models of pellet grills. With the introduction of the Rider DLX, Oklahoma Joes got the grilling functionality just about perfect!

Disclosure: Oklahoma Joes provided this grill for free but did not pay for this review.

Here is a quick video walk through of the Rider DLX. The video got a case of the shakes when it was uploaded to YouTube but I will make a new review video in a month or two to show how the grill holds up.

Using the Rider DLX as a Wood Fired Grill

The lower cooking grate on the Rider DLX is a massive 2819 inch rectangular cast iron grate with a circular 17 inch Flex Grate in the middle.

There are three settings on the digital control panel for grilling:

I crank the grill to High when I want to put killer grill marks on steaks but do most of my grilling on the Medium setting.

I love grilling on the Rider DLX. The grill is as easy to use as a propane grill and lets me cook over an open wood fired flame without having to mess around with lighting charcoal.

I made a video of my first time grilling chicken wings. I wanted to see how much usable grilling space the circular grate really provide as well as start to understand hot spots, flare-ups, etc. The wings turned out amazing and I was delighted at how the grill performed!

Something that became really apparent while I was grilling the wings was how easy it was to do adopt a two zone (Hot/Cool) technique. If the wings were starting to burn then I could easily move them to a cooler part of the grill. On most pellet grills you only have a single temperature throughout the grill. I like the flexibility the Rider DLX offers.

I have been using the Rider DLX as my primary grill for over a month now and have no complaints whatsoever.

Using the Rider DLX as a Smoker

Let me start by saying the the Rider DLX is an excellent smoker. However, I do need to follow that up with the caution to not use the circular area on the primary cooking grate when you are cooking Low and Slow.When I use this grill as a smoker I will place the meat on either of the two elevated cooking racks or on the sides of the primary grate. The circular grate directly above the fire pot gets too hot for Low and Slow even when the grill is set at its lowest settings.

The two upper grates give you plenty of space for meat. I can easily get three slabs of baby back ribs per grate. When I do long cooks (ribs, brisket) I like that I have the space on the lower rack to add a water pan. 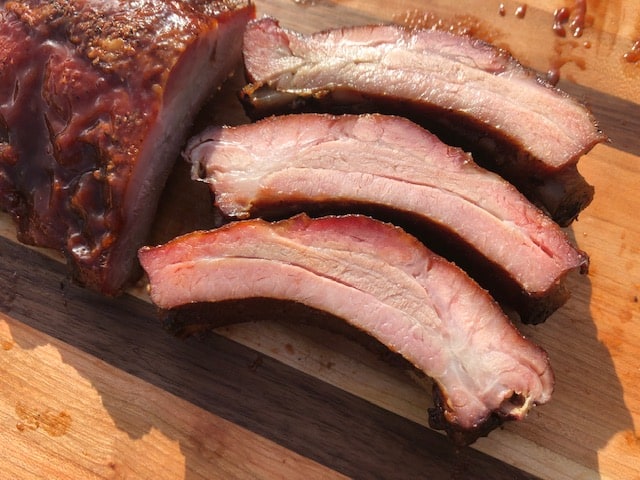 Here are a couple of small smoking sessions I did using the grill. First up are some awesome thick cut pork chops.

The Oklahoma Joes Rider DLX is a great pellet grill and has turned into my go to cooker. The ability to do serious wood fired grilling is a game changer for me.

The design that allows you to do high heat grilling also creates different temperature zones in the grill. Figuring out how to work the different zones, when to use the upper grates, etc does come with a learning curve but once you get a few cooks under your belt it makes perfect sense.

If you have any questions about this grill then please leave them in the comments below. I will respond to them and use them to update this post and make some more videos!